I have been dabbling with a few cards since being back to work...﻿ 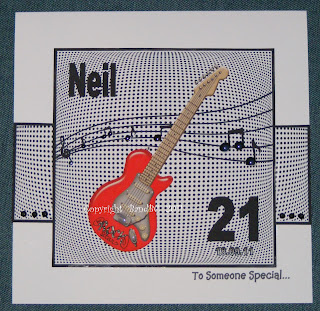 This card was a commission form a friend at work....
I gave it to her today and she was thrilled with it!!! Thank goodness!
I wanted to make the card quite modern and trendy...and for a male. Hmmm....
This took a LOT of thought! 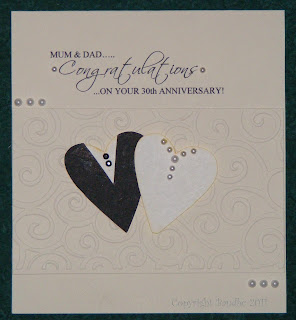 I have seen this type of image on lots of cards recently, and think it
is lovely....
I made my own...hand-drew the hearts, and added
pearls to one and a "tux" to the other.
Simply layered onto embossed strip.
Computer generated sentiment. 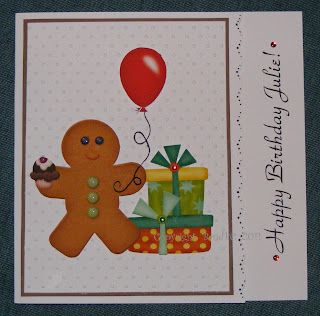 This had to be a quick one...I was asked one evening to make this...for the next day...
Ooooh, the stress!
I knew the woman (whose birthday it was...Julie) made gingerbread,
so used a gingerbread man in the main image...
along with digi presents and balloon.
Of course, some glossy accents got popped on there too! 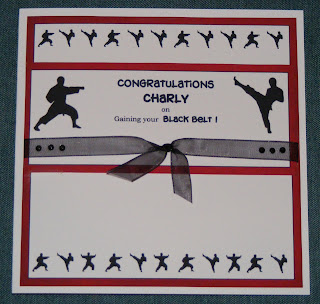 I made a card similar to this, not long ago. That card was for a man
who had just gained his blackbelt...this card was
for a woman who has just passed her blackbelt!
I used the same stuff as for the mans card, but changed it by taking away
the grey background and adding the red matting.
(Black ribbon to represent the blackbelt.) 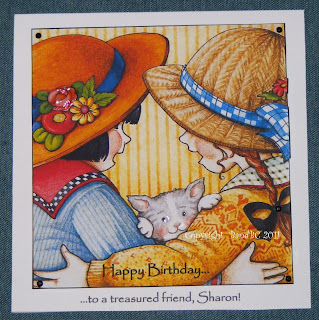