I was jumping for joy when I got this image! 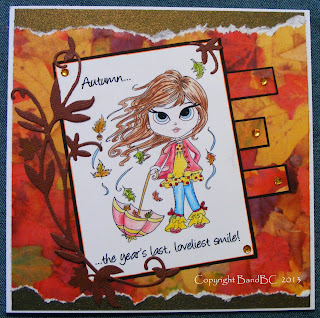 It's a gorgeous Lacey Sunshine image - Emilys windy day.
I coloured her with my watercolour pencils and a teeeeny brush,with water.
I have had that one piece of leaf paper in my stash for yonks...
it was a 12 x 12 piece...now I have about 3 x 3 left of it!
(I have got a few cards from that piece over the years)
The leaf diecut is a marianne die, cut on my bigshot and I have added a few
punched leaves on there too, with a few little sparkly gems.

It was my Mother-in-Laws birthday recently, and I made her this card.. 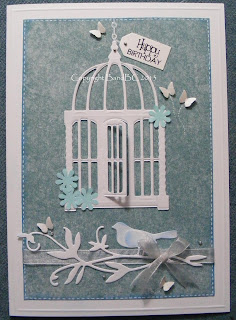 I used some new Marianne dies I got recently...
Both the birdcage and the flourish are lovely to cut
and I really enjoyed making this card with them. I used my Marianne bird too..minus the branch.
The paper is from a HOTP kit that I got from QVC a few years ago...
just love that colour paper!
I drew some faux stitching all around the outside edge,
added some MS punched butterflies and
a few punched flowers.

This card is for my second challenge...over at Glitter n Sparkle...
"add black" 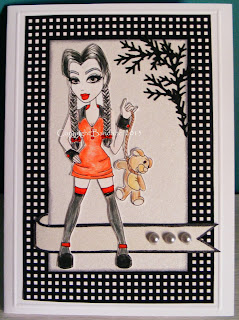 I was given this image to use, Wednesday Sara Addams from Sassy Studios.
I found this really difficult as after I cut the black gingham,
which I knew i wanted to use,
I didn't have a clue what else to do~
I played and played with this image... and eventually decided on this.
I hand-drew the little ribbon... thinking I would put a sentiment on there,
then I couldn't come up with one!  lol!
All in all, I'm not in love with this card, as I am some of my others...
you could say his was a "challenge!"
﻿
Posted by Vic at 14:49 2 comments:

I made this for someone to give to her ballet teacher... 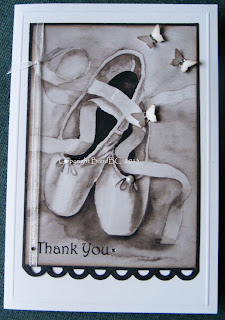 Its a monochrome card...all in shades of grey and white, with a touch of black.
Sentiment is computer generated, a little white organza ribbon down the side,
with a punched bottom edge and of course...

those Martha Stewart butterflies have flown in, too!  :)
Posted by Vic at 20:38 3 comments:

My first card for Glitternsparkle blog

As I told you earlier this week, I have now joined the design team for
Glitter n Sparkle challenge blog.
So here is my first card... 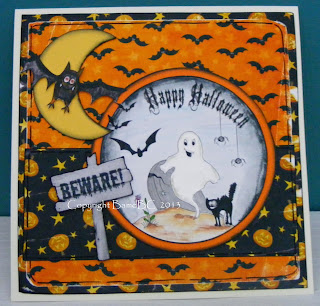 The image is from Floppy Latte - Halloween circle.
I drew on the spiders and bats myself and popped a little digital "scaredy cat" on there, too -
all coloured with watercolour pencils and the ghost has glossy accent all over.
The papers are digital downloads that I have had for ages...
as is the beware sign and the large bat.
I cut out and inked the edges of the moon. 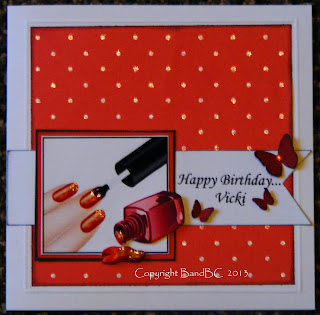 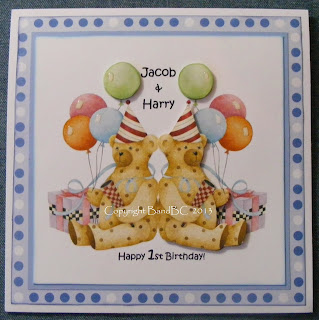 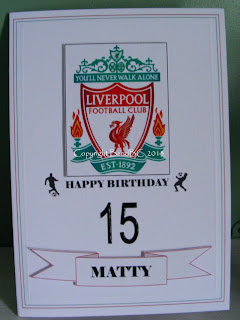 Thanks for browsing my blog and any comments you leave on my cards. x
﻿
Posted by Vic at 20:47 13 comments:

Just a quickie... will post more later, or tomorrow...
I just wanted to share my great news... I have been asked to be on the design team for the Glitternsparkle blog! Woop Woop! 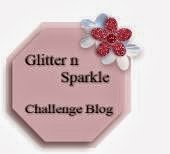 I have never been on a DT before, and I have made my first card for them! (But I'm not allowed to show it yet)
So that will mean I should get a bit better at updating my blog a bit more regularly.
They have weekly challenges (that I have entered in the past and come top 3 in) which are loads of fun, so come over and join in!!! ;)
Posted by Vic at 16:43 1 comment: