The ones I made for my Mum & Dad, Sister and her family
and my In-laws. 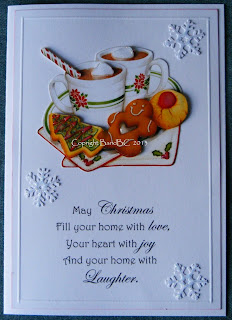 This is my Mum & Dads card.
its an a5 card, computer generated sentiment,
and I found the image on my pc...have had it years...possibly from pc crafter?
Anyway - I decoupaged some of it, used some
glittery stickles and glossy accents.
The snowflakes come form  Martha Stewart border punch,
which I chopped up separately and added some glitter too.
I would like to enter this into the following challenges...
Creative belli - Christmas - 2 Jan
Feeling crafty - Christmas - 2 Jan
Crafty boots - snow and sparkles - 5 Jan
Shabby tea room - a few of my favourite winter things - 30 Dec
Craftitude - anything goes - Christmas sparkle - 10 Jan 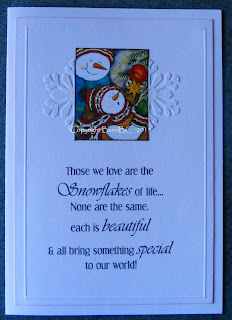 This card was for my sister, her partner and their children.
I chopped a Martha stewart punched snowflake
in half and fit one half, either side of the image,
which is a little glittered and glossy accented!
I found the sentiment on the internet and played about with the fonts,
to get it looking like that.... I can't believe I only finished these 3 cards on Christmas eve!
I won't leave it that late next year!
I would like to enter his into the following challenges -
C is for challenge - modern Christmas - 6 Jan
Crafty Hazlenuts - last minute card - 27 Dec
﻿ 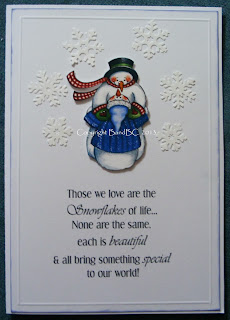 Finally, I made this card for my In-laws.
I thought the image was sooo cute!
Are they hugging, or having a dance? lol! ;)
The snowflakes were cut apart form the Martha Stewart border punch
and glittered for a frosty-feel.
(although I don't think you can see this on the pic)
I would like to enter this into the following challenges...
Whimsie doodles - photo inspiration - 13 Jan
Ladybug crafts - keep it clean and simple -5 Feb
Card mania - winter wonderland - 28 Dec
Cutie pie  - cute, only snowmen allowed! - 4 Jan
Posted by Vic at 14:32

Thank you for sharing your work with all of us at Crafty Boots Challenges.

Beautiful holiday cards. Thanks for playing along with us at the Belli Challenge, Pat K

What wonderful creations - I'm sure all your family were thrilled.
Thanks for joining us at Ladybug Crafts Ink Xx

What a beautiful selection of cards :o)
Jackie xx

Thank you for joining in with us over at Feeling Crafty Challenge - Good luck! :)

All of the cards are so darling! Thanks so much for joining us this week at The Shabby Tea Room :)

What beautiful cards and the sentiment is lovely.

Thanks for joining in with us this time at The Cutie Pies.

Thanks for entering your lovely card for CHNC challenge 156 - you could also enter this into my CHNC challenge extra for December - I'd love to see it there too. x

All cards are very sweet :) Thank you for joining us at TSTR challenge !

A fabulous card and a gorgeous image. It's so homely and warming.

Beautiful cards. Thanks for sharing with us at Craftitude Challenges. Good Luck.

Thanks for entering this lovely card for my CHNC challenge extra for December - hope to see you again soon. x

Beautiful Snowman card, thanks for joining us at Cutie Pie's.
Sue x